“Research Day is our annual celebration of the scientific advancements achieved by our surgeons, scientists, and residents,” said Lyle Moldawer, Ph.D., professor of surgery and the department’s vice chairman for research. “But, over the past several years, Research Day has become much more than a mere celebration. It has become an opportunity for the faculty and residents to strengthen existing partnerships and establish new collaborations.” 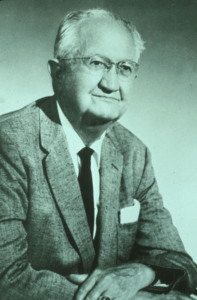 –‘When I was a teenager in Chicago, my father (Lester) would tell my mother he was sorry to be late but that the Tea Party he had at 5 pm took longer than he expected. I asked what kind of Tea Party did you have and he told me, “I invite the surgeons to come to my office and we discuss their ideas for new research and the Tea Party gets larger each year and more interesting so I am glad we do this.” My mother was very understanding, but we had a large family including a grandmother, aunts and four children. Since my father was the head of the family, we waited for him always. Maybe this is where it all started?”  Charlotte Jeffrey, 2012

Dr. Dragstedt’s second career began in 1925. When the University of Chicago decided to build a university hospital on its campus, Dr. Dallas Phemister employed Dr. Dragstedt as a consultant for the purpose of designing research facilities. At the conclusion of the assignment, Dr. Phemister appointed Dr. Dragstedt an Associate Professor of Surgery, and is said to have stated, “I can teach surgery to a physiologist; I am interested in teaching physiology to surgeons.” In 1947, Dr. Dragstedt succeeded Dr. Phemister as Departmental Chairman, a position he held until his retirement in 1959. It is not surprising that when Dr. Dragstedt came to the University of Florida following his Chicago retirement, he reverted to a full-time physiologist with a joint appointment in both the Departments of Surgery and Physiology. Was Dr. Dragstedt a physiologist or a surgeon? He was both. Although an outstanding lecturer, Dr. Dragstedt’s major impact as a teacher was in the laboratory.”