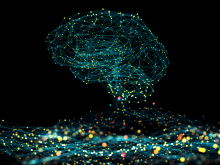 Everything in surgery turns on a dime.

Surgeons are responsible for making complex, high-stakes decisions under time constraints and uncertainty. But what if there was a way to outsource some of the cognitive load and phone a friend — or a computer?

Research conducted by the University of Florida’s departments of surgery, medicine, and anesthesiology is exploring how using artificial intelligence may improve patient outcomes and outsource some of surgeons’ cognitive load.

“I believe that many of our more traditional clinical decision-support systems could benefit from the inclusion of artificial intelligence,” said Tyler Loftus, M.D., a surgical critical care fellow.

Artificial intelligence is a broad term for a computer system that mimics human cognitive functions, like learning. Currently, Loftus and his collaborators create models whose capabilities focus on risk assessments and predictions.

“The phrase ‘artificial intelligence’ denotes a certain ability to reason independently, and we’re not there yet. Still, we certainly are learning a lot along the way,” said Patrick J Tighe, M.D., M.S. an associate professor in the department of anesthesiology. “Right now, these AI models are an incredible building block. For instance, using machine learning to better predict a patient’s risk of heart attack after surgery could be incredibly useful.”

Eventually, it will be able to recommend discrete actions for specific circumstances.

Surgical decision-making is dominated by thinking through hypothetical situations, individual judgment, and heuristics. Inevitably, factors like this can lead to bias, error, and preventable harm. Traditional predictive analytics and clinical decision-support systems are intended to augment surgical decision-making, but their ability to be user-friendly is often compromised by the time it takes to sift through data.

“The sheer amount of that data is not within the scope of human capacity,” said Azra Bihorac, M.D., a professor of surgery in the College of Medicine. “By using our computational sources, we’re not replacing humans, but augmenting them. Just like we are augmented by our cell phones, you know — we can access any information we want on the fly.”

Using artificial intelligence models that “learn” from data would grant a one-stop access point where a physician would be able to access the most significant and relevant parts of datasets promptly. This would allow them to synthesize and intelligently interpret data, thus facilitating decision-making, Bihorac said.

After all, every surgery is composed of a hundred moving parts.

“Traditional statistical analyses really have a difficult time capturing the complexity inherent to disease,” Loftus said. “Artificial intelligence models can better represent those complex systems and disease processes because they learn from the data instead of having to conform to rules.”

These models could augment surgeons’ decisions, affecting everything from the decision to operate to the mitigation of modifiable risk factors. They could even alter how a patient’s postoperative management is approached.

“One of the important aspects of preoperative discussions is risk assessment,” Loftus said. “This allows the patient to understand the risks of surgery and what to expect afterwards, and that can influence their decision to undergo surgery.”

Being able to give accurate prognostic information can inform that choice, Loftus said. Artificial intelligence can also identify modifiable risk factors and provide data regarding the likelihood of certain complications. If surgeons can modify a risk factor, they can decrease the risk of its corresponding complication and provide a patient with a better outcome.

“This kind of information can make a patient much more willing to engage in prehabilitation and risk reduction strategies,” Loftus said.

Artificial intelligence could not only improve patient outcomes, but also change the way multidisciplinary health teams collaborate by providing another way to ensure continuity of care. The goal is always to merge these transitions in a patient’s care seamlessly, and facilitate it along the way.

“(In surgical patients), there is the underlying health, and then an acute episode happens,” Bihorac said. “You get lost from those who were there and those who have taken care of you for a long time.”

Health is not many episodes separated from each other, Bihorac said.

Rather, the best standard of care occurs when everything is viewed as one continuous process.