Georgia retiree James New had delayed his follow-up colonoscopy by a year. Instead of going three years between exams, he’d gone four. And the news he received after he completed his February 2014 colonoscopy was something no one wants to hear: The doctor was quite certain New had colorectal cancer. 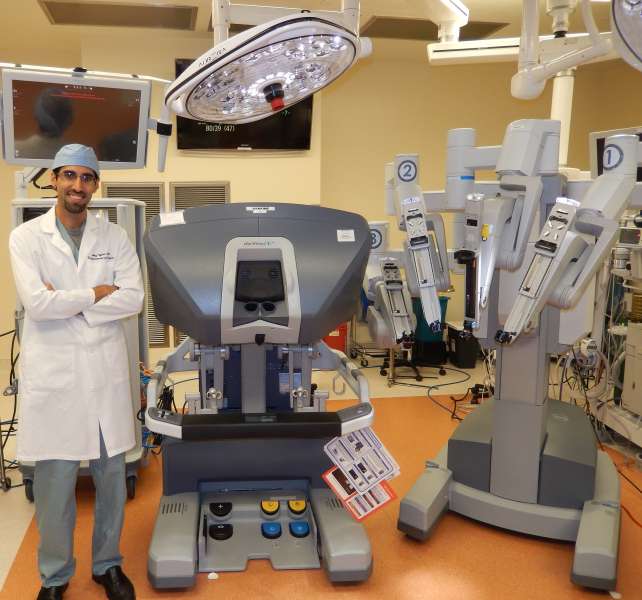 New’s cancer was stage III, meaning it had spread to some of his lymph nodes but not yet made its way to other parts of his body. His local oncologist, who had completed her fellowship at UF’s College of Medicine, recommended UF Health Shands Hospital and the UF Department of Surgery.

New, who was quite anxious about his diagnosis, was relieved to see Atif Iqbal, M.D., an assistant professor and a colorectal surgeon at UF Health, within three days of his referral. Iqbal and a team of other UF Health oncology experts created a multidisciplinary plan for treating New, which included radiation and chemotherapy before surgery. They helped arrange for these to take place in Valdosta, where the patient and his wife, Diane New, live.

New was glad to learn that despite having a low-rectal cancer close to the anus, he would likely not need a colostomy, which would require giving him a permanent bag. New also appreciated that robotic surgery would be an option for him at UF Health, which is much less invasive.

“I’m 70. I just wanted to keep it (surgery) as minimal as possible,” New explained. “I was told that Dr. Iqbal specialized in robotic surgery, and he came highly recommended.”

Iqbal also sees advantages in robotic surgery over laparoscopic surgery, “which also has smaller incisions but lacks the 3-D vision, full-motion dexterity and higher degree of freedom offered by the robotic arms,” he said.

To conduct robotic surgery, the surgeon maneuvers hand controls at a special console in the operating room. His hand movements control the robotic arms carrying out the operation, which can mimic all degrees of hand movement. Standard laparoscopic instruments, in contrast, can only open and close.

After training in general surgery at the University of Missouri, Iqbal completed a fellowship in colorectal surgery at Washington University/Barnes Jewish Hospital in St. Louis. There, he learned to perform robotic surgery.

UF Health is a high-volume center for robotic colorectal surgery, a notable designation considering the low percentage of U.S. surgeons performing this procedure who have
completed a high volume of the operation.

After undergoing chemotherapy and radiation in the spring of 2014, New was ready in June 2014 for the first of two surgeries to address his colon cancer. Iqbal removed the diseased part of New’s colon and rectum robotically, and connected the ends back together. Because the connection was so close to the end of the rectum, a temporary bag (ileostomy) was made to allow for healing of the hook-up (anastomosis) site. Not long after this operation, New and Iqbal got some very good news.

“Dr. Iqbal had mentioned that I was the second patient he’d had during the three years or so he had been at Shands that, after surgery, the pathology report came back with absolutely no sign of any cancer cells,” New recalled. “So, that made me feel good.”

In a second surgery, a few months after the first, Iqbal reconnected the two ends of New’s colon back together and removed the ileostomy, since the colon had now healed.

The soreness — normal after the surgeries he had — has subsided and New has been excited about getting back to the gym to exercise. He is more active in daily life than he was during his course of cancer treatment, he said, and he looks forward to getting out more with his wife and traveling throughout Georgia and to Tennessee to see their grown kids and grandchildren.