In May 2001, Morgan Humphreys turned blue.

Until that point, her mother said, Morgan’s birth had been uneventful. After the care team took her newborn to the nursery, Shannon Cockrell waited in her North Carolina hospital room to meet her daughter.

Hours passed and nurses brought food, but no news of Morgan. Shannon waited some more.

Then, a cardiologist appeared, and deposited something in her lap.

But instead of a baby, Shannon found herself looking at a thick stack of paper. Different articles stapled together promised to tell her all about a condition called Tetralogy of Fallot, a combination of four heart defects present at birth that affect the heart’s structure and blood flow.

For the next hour, the cardiologist caught Shannon up to speed: During her bath, Morgan’s body turned blue; an echocardiogram revealed an issue with blood flow to her lungs, the result of a complex congenital heart defect. Morgan would need open-heart surgery almost immediately.

“I remember being scared,” Shannon recalled. “I didn’t know they had to cut through your sternum—it’s details like that most people don’t think about.”

Shannon met with a couple of the surgeons recommended, and immediately clicked with one Mark Bleiweis, MD, who now serves as director of the congenital cardiothoracic surgery program at UF and clinical director of the UF Congenital Heart Center.

The first day they met, he stood in the halls and spoke with her at length.

“Dr. Bleiweis didn’t know us from anything, but still took the time to answer every single question I had,” Shannon said. “I felt comfortable with him.”

He performed Morgan’s first open-heart surgery five weeks later. One Sunday shortly after the procedure, Shannon was surprised to see Bleiweis strolling through the hospital in golf clothes. 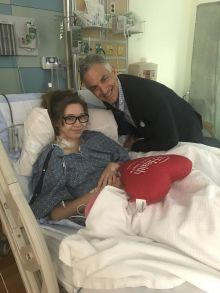 “It’s Sunday. What are you doing?” she asked.

Bleiweis upheld Shannon’s impression of him through Morgan’s second open-heart surgery in 2010 to replace her pulmonary valve. Their family trusted him. So perhaps it came as no surprise that when Shannon’s vision started to blur at work—the beginnings of a small stroke—she would turn to Bleiweis, too.

Physicians at a Jacksonville hospital attributed it to a previously asymptomatic tumor on her aortic valve.

“They weren’t sure it was operable,” Shannon said. “They worried about paralyzing me by operating too soon if it was a ‘true’ stroke. I didn’t know what to do.”

After her diagnosis, she excused herself to go the bathroom, and messaged Bleiweis. He responded almost immediately.

As he headed into the operating room for a heart transplant, Bleiweis called her. He could operate on her—no question— but suggested she first be evaluated by Diego Moguillansky, MD, director of the adult congenital heart disease program at UF.

She drove straight to Gainesville where Moguillansky coordinated additional studies to further characterize her aortic valve tumor and exclude a prior stroke. During the same admission, she would, just like her daughter, undergo open heart surgery at the hands of Bleiweis.

Nine days later, she was out of the hospital and feeling well. In the months that followed, both Shannon and Morgan transferred their cardiology care to UF Health Shands in Gainesville so they could be followed by Moguillansky.

Then, in 2018, Morgan developed fatigue and shortness of breath. After an extensive evaluation, Moguillansky diagnosed her with significant stenosis and insufficiency in her previously replaced pulmonary valve. As a result, Dr. Bleiweis would operate on Morgan for the third time to re-replace her pulmonary valve.

Since then, her symptoms have resolved. Morgan is now pregnant with her first child—and Moguillansky has been indispensable in guiding Shannon and her daughter through the pregnancy. 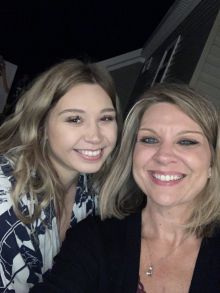 “When a pregnant woman has congenital heart disease, we follow her closely with our OB colleagues to assess her cardiovascular risk during pregnancy,” he said. “Primarily, we monitor her to ensure her heart is adjusting well to pregnancy and assess for any need for special considerations, especially around the time of delivery.”

Around 20 to 22 weeks of gestation, she underwent a fetal echocardiogram to assess for any cardiac defects in her baby. There were none, and Morgan is still thriving—with her baby boy due in a few weeks.

“We see patients of all ages,” Moguillansky said. “It is not uncommon for us to see women in childbearing age, so we always factor that into our clinical decision-making both before and during pregnancy.”

This may include avoiding teratogenic medications, contraception for women with complex congenital heart disease who are expected to have an excessive cardiovascular risk during pregnancy, and surgical and non-surgical procedures to optimize their cardiovascular condition prior to pregnancy, Moguillansky explained.

For now, Shannon and Morgan are looking forward to welcoming their family’s new addition—and are glad the new baby won’t be expected to share their experiences with heart surgery.

“I never thought I’d live through something like this with my child,” Shannon said. “It creates a unique bond. After all, how many kids can empathize with their mothers when it comes to open heart surgery?”