Lyle Moldawer, Ph.D., Philip A. Efron, M.D., and multidisciplinary collaborators Michael Kladde, Ph.D., and Laurence Morel, Ph.D., have received an RM1 award to study dysfunctional myelopoiesis and myeloid-derived suppressor cells in the pathobiology of sepsis. The funding will stretch over a period of five years with an annual total award of $1.58-1.68  million.

“I wanted to extend my gratitude to the college and university for their continued support of this endeavor. It has been a long road, and this could not have been accomplished without your support,” said Moldawer, a professor of surgery and key force behind the department’s Sepsis and Critical Illness Research Center.

Improvements in the management of sepsis over the past two decades have dramatically improved patient survival. But they have also also resulted in a new phenotype: Chronic critical illness. Not only does the support from the National Institute of General Medical Science (NIGMS) validate this observation—it also opens the door to developing solut 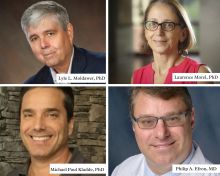 The grant stitches together a unique and highly qualified cadre of investigators from different areas of health science. Each of their interdisciplinary backgrounds bring a different perspective to the underlying immunological mechanisms that drive chronic critical illness.

Once researchers have a thorough understanding of the underlying immunological mechanisms that drive chronic critical illness, appropriate personalized therapeutics be developed for patients in this new rapidly expanding population.

“Although the in-hospital mortality after sepsis has significantly decreased, the one year morbidity and mortality of these patients remains suboptimal and unacceptable. This program seeks to directly address the latter,” said Efron, co-PI and director of the Laboratory of Inflammation Biology & Surgical Science.

“This program will focus on better managing survivors of sepsis to reduce risk of secondary infections and rehospitalizations, while also advancing functional recoveries,” Moldawer said. “New therapeutics targeting the persistent inflammation and immune suppression seen in many sepsis survivors will result in improved outcomes and quality of life.”