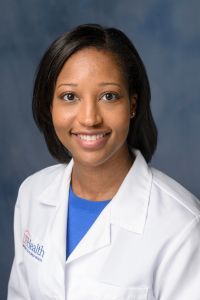 You can’t ignore what’s right in front of you — or what isn’t.

Crystal Johnson-Mann, M.D., has put the significant disparity of the number of Black and African American women in academic surgery into writing. The surgeon and her coauthors published on the subject in the Annals of Surgery in March.

“It’s one thing to know that there is a shortage of black women in academic surgery,” said Johnson-Mann, an assistant professor in minimally invasive/bariatric surgery within the University of Florida College of Medicine’s division of gastrointestinal surgery. “It’s another thing to see it laid out for you. Data doesn’t lie, and at less than 1% of surgical faculty, the numbers are far from a representative sample of the population.”

Johnson-Mann collaborated with a team of prominent Black women in surgery, bringing in perspectives from a variety of leadership positions and locations around the country. Together, they determined that very few Black women are promoted to the rank of professor with tenure.

Currently, there are 372 chairs of departments of surgery in the United States, none of whom are Black women.

“Part of the goal of my work is to be a face,” Johnson-Mann said. “I want people to see someone who looks like them, so they not only know it’s possible, but that they have someone to turn to for mentoring and guidance in a competitive setting.”

There is a power in seeing someone who looks like you. Part of the reason Johnson-Mann said she chose to practice at the UF College of Medicine was the college leadership’s commitment to pursuing diversity in a way that felt authentic, rather than superficial. When the goal is to identify and remove structural barriers to promotion, NIH grant funding and academic advancement of Black and African American female surgeon scientists, diversity needs to be understood in a way that is as purposeful as it is meaningful.

“I’m lucky to have had really great mentors who really championed me, and I’d like to do the same,” Johnson-Mann said.

In the world of modern-day surgery, academic medical centers cater to student and patient populations that reflect the changing demographics of the United States. The educational experience and standard of care surgeons provide can only be improved when leadership and mentorship reflect these demographics as well, she said.

“We need a dedicated call to action for this population,” Johnson-Mann said. “This is a well-known problem. It’s time to go from identifying barriers to doing something more. “