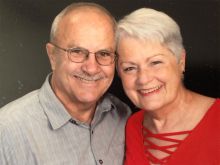 Al Johnson has lived in Georgia for most of his life. After owning a successful auto repair shop in the area for 20 years, he had to retire his business right next door due to his unexpected health issues. This was crushing to him after building a business he truly loved.

“I’d probably still be working if it weren’t for all my medical issues,” Al said.

Al’s health changed significantly in 2010, when he got diagnosed with prostate cancer at 58. After months of misdiagnosis, discussions of having his prostate removed, cancer spreading into his lymph nodes and radiation, he didn’t know what his future looked like. As a man of faith, he trusted God to help him through and get him to the right physicians.

In 2014, he finally was able to come to UF Health and get the help he needed. Dr. Larry Yeung, in the UF Department of Urology, evaluated him and after some testing and maintenance, installed a suprapubic catheter for Al. Two years later, Dr. Yeung coordinated a colostomy operation with Dr. Sanda Tan.

After some initial success, his bladder was removed, and he was also given a urostomy bag. While it was a painful process, Al knew he found a hospital and physicians he could trust.

That discovery would soon pay off again.

In 2018, Al unexpectedly had a heart attack. Since he still lives in Georgia, he saw local doctors who performed angioplasty and placed a stent in the right coronary artery. They told him that he has a chronic total occlusion (CTO) of left anterior descending artery (LAD), and angioplasty or coronary artery bypass grafting (CABG) were not possible due to complexity of the lesion. He continued to experience angina and was eventually referred back to UF Health.

Al met Dr. Calvin Choi, an interventional cardiologist who leads the UF Health Chronic Total Occlusion clinic. After a lengthy discussion, Al remembers Dr. Choi guaranteeing that he would do his best.

Al said that reminded him of himself, so he trusted him. Al underwent a successful angioplasty of LAD CTO and is now doing well. He only has to return for once-a-year cardiac checkups.

“Dr. Choi called me and talked to me one night for 45 minutes,” Al said. “I’ve never had a doctor do that. It was like he was a family member.”

Al and his wife now come down here for his urologic and cardiac care. It’s a drive, but it’s worth it to them.

“That hospital has more caring people than any place I’ve been in my life.”