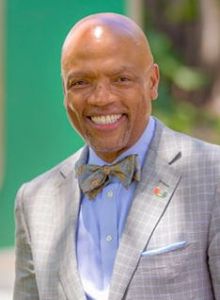 Henri R. Ford, M.D., M.P.H., was recently recognized at the Edward R. Woodward, MD, Professorship Distinguished Lecturer event held on April 3. Dr. Ford, the dean and chief academic officer at the University of Miami Miller School of Medicine, had the honor of receiving the award “The Edward R. Woodward, MD, Professor Distinguished Lecturer – In Appreciation of Your Presentation on Leadership in American Surgery – African American Perspective at the University of Florida.”

Edward R. Woodward, M.D., was a nationally known leader in gastrointestinal surgery and the first chairman of surgery at the University of Florida College of Medicine. He graduated from the University of Chicago Medical School in 1942 and also served in the United States Navy. His professional surgical career begin in 1953 at the University of California at Los Angeles, and he joined UF in 1957 where he served as a professor and chairman for 25 years. After retiring in 1982, Dr. Woodward remained an active clinician, scholar and educator who trained more than 140 surgeons. In 1979, the UF Department of Surgery faculty established the Edward R. Woodward Surgical Society and then the Edward R. Woodward Professorship in 1982.

Dr. Ford became dean of the University of Miami Leonard M. Miller School of Medicine in 2018, and he is a Haitian-born pediatric surgeon who maintains close ties with his native country. He traveled to Haiti after the earthquake in 2010, and provided surgical care to children injured in the natural disaster. Since then, Dr. Ford returns to Haiti regularly to provide medical care to the residents of his home country, and he even performed the first successful separation of conjoined twins in Haiti in 2015.

He was most recently senior vice president and chief of surgery at the Children’s Hospital Los Angeles, vice dean of medical education and professor and vice chair for clinical affairs in the department of surgery at the Keck School of Medicine of the University of Southern California. In addition, his professionals achievements include groundbreaking research on the pathogenesis of necrotizing enterocolitis, as well as being the author of over 300 publications, book chapters, invited manuscripts, abstracts and presentations.

Dr. Ford received his bachelor’s degree in public international affairs from Princeton University, and he attended Harvard Medical School. He also received his master of health administration degree from the University of Southern California.