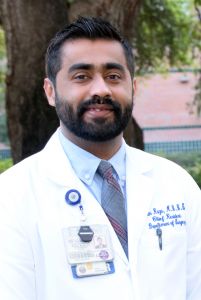 The University of Florida College of Medicine’s department of surgery created the award to honor the memory of Hugh A. Walters, MD, a surgery resident whose life was cut tragically short in 2008.

“I know some of the residents who have received the award in the past and how respected they were among their peers,” Raza said. “It feels amazing to be in the same category. I am humbled and honored.”

The award is given annually to a surgical resident who embodies Walters’ qualities of compassionate care and selfless dedication to excellence. Each year, surgery residents select one of their peers to receive the honor. Recipients return the following year to lead a Grand Rounds presentation at the department of surgery.

“I’m looking forward to returning in 2018 to deliver that lecture,” Raza said.

This fall, Raza will enter a colon and rectal surgery residency at Presbyterian Hospital/UT Southwestern Medical Center in Dallas.

The award is part of the Hugh A. Walters, MD, Humanitarian Fund, which is used to support humanitarian efforts in surgical education.