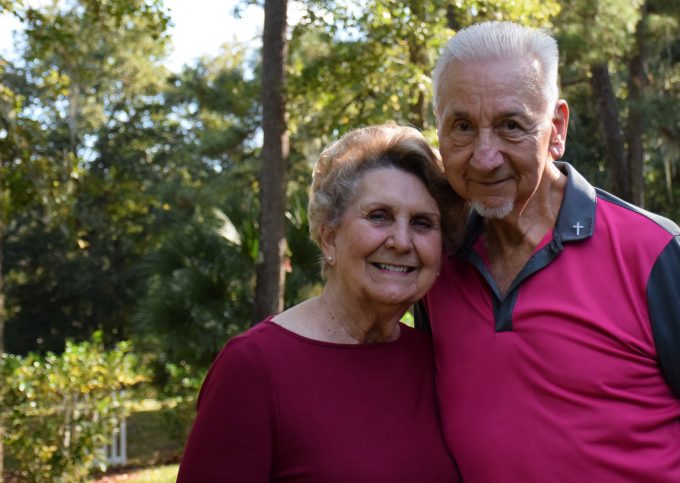 It was a normal Sunday afternoon for Ralph and Joan Glaeser.

In January 2016, the Gainesville couple were returning from church and a trip to the grocery store when Ralph, 84, began experiencing pain in his side.

“I tried to get a blood pressure reading on Ralph, but I couldn’t,” said Joan Glaeser, 80, his wife of 62 years.

An undiagnosed thoracoabdominal aortic aneurysm had ruptured. Ralph’s life was in danger, so he was quickly transferred to the main hospital for surgery.

“We met with his family, said we were taking him to the operating room and promised to do everything we could to save his life,’’ said Javairiah Fatima, MD, an assistant professor of surgery in the division of vascular surgery and endovascular therapy at the UF College of Medicine.

While surgeons successfully repaired Ralph’s ruptured aorta, some of his organs sustained damage from the aneurysm rupture and the low blood pressure that occurred until his aorta was clamped to control the bleeding.

“He lost 40 pounds and his physical condition was very fragile,” Joan said. Side effects from a stroke 20 years earlier also reappeared.

“He chugged along on dialysis three times a week during the rest of his hospitalization,” Joan said.

“All of a sudden, I saw him returning. The nurse at the head of his bed was dancing and singing. Ralph was crying uncontrollably,” Joan said. The nurse told her when they hooked Ralph up for dialysis, they could not find the order for the procedure. The doctor’s response: “There is no order because you do not need dialysis.”

The Glaesers said they are very involved with their big extended family. The couple fostered 76 children in their younger years, and they have four sons and one daughter as well. Ralph retired as a real estate broker after his stroke, and more recently as an online computer science teacher at Santa Fe College.

Ralph spends his time gardening and feeding the birds in his back yard. Ralph also maintains a roster of surviving members of the 809th Air Police Squadron, with whom he served in the Korean War.

“Life is simple but active, and I find deep and lasting pleasure in sharing the daily activities and accomplishments of my children and grandchildren,” Ralph said. “With the help of UF Health, and the grace of God, I am now back to enjoying life.”